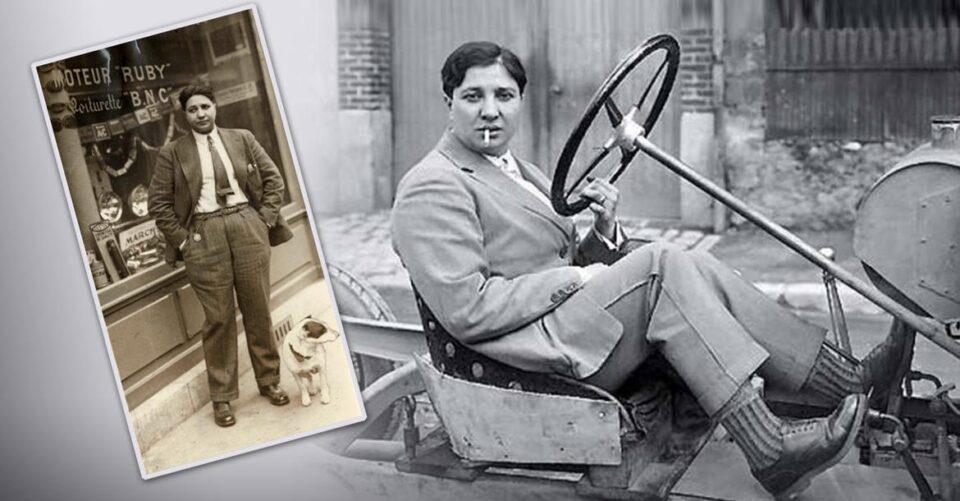 Like most people these days, I sometimes feel the urge to spend an idle hour roaming the Net. Either because I have nothing better to do or out of curiosity. Doing so the other day, I came across a post I considered so curious that I decided to share it with you. Text taken from Wikipedia with a few very minor changes meant to make things shorter and clearer. Comments, welcome.

Violette Morris (18 April 1893 – 26 April 1944) was a French athlete and Nazi collaborator who won two gold and one silver medal at the Women’s World Games in 1921–1922. She was later banned from competing for violating “moral standards”. She was invited to the 1936 Summer Olympics by Adolf Hitler and was an honored guest. During World War II, she collaborated with Nazis and the Vichy France regime. She became known as “the Hyena of the Gestapo” and was killed by the French Resistance.

Violette Morris was born to Baron Pierre Jacques Morris, a retired French Army cavalry captain, and Élisabeth Marie Antoinette Sakakini, of Palestinian Arab origin. Morris spent her adolescence in a convent, L’Assomption de Huy. She married Cyprien Edouard Joseph Gouraud on 22 August 1914 in the 8th arrondissement of Paris. They divorced in May 1923. Morris learned how to drive during World War I and during the war she drove ambulances and worked as a courier including at the Battle of the Somme and the Battle of Verdun.

In addition to her football career, she was an active participant in many other sports. She was selected for the French national water polo team even though there was no women’s team at the time. She was an avid boxer, often fighting against, and defeating, men. Among the other sports she participated in were road bicycle racing, motorcycle racing, car racing, airplane racing, horseback riding, tennis, archery, diving, swimming, weightlifting, and Greco-Roman wrestling. Her most brilliant athletic years were considered to be from 1921 to 1924, when her slogan was “Ce qu’un homme fait, Violette peut le faire!” (English: “Anything a man can do, Violette can do!”). In 1924 she participated at the 1924 Women’s Olympiad again taking the gold medal in discus and shot put.

Morris’ lifestyle in the 1920s was quite different from the traditional role of women. In addition to her wide-ranging athletic activities, Morris deviated from traditional behaviors of the time in several other ways. She was homosexual, dressed in men’s attire, was a heavy smoker and swore often.

In 1928, the Fédération Féminine Sportive de France (FFSF) (French Women’s Sports Federation) refused to renew her license amid complaints about her lifestyle and she was therefore barred from participating in the 1928 Summer Olympics. The agency cited her lack of morals, in particular, Morris’ penchant for wearing men’s clothing. She had also punched a football referee and had been accused of giving amphetamines to other players. After 1928, her auto racing license was revoked on similar moral grounds and Morris started a car-parts store in Paris, and, along with her employees, built racing cars. The business went bankrupt.

In 1930, Morris unsuccessfully sued the FFSF, claiming damages, as she could no longer earn wages competing as an athlete. During the trial, an obscure ordinance from 1800 forbidding women to wear trousers was used against her. Historian Marie-Jo Bonnet claimed that if Morris’ homosexuality was not directly targeted in the trial, it was made an issue throughout. Ironically, one of the lawyers acting for the FFSF was the noted campaigner for French women’s rights, Yvonne Netter. A quote was attributed to Morris after the trial, but was censored:

We live in a country made rotten by money and scandals, ruled by speechifiers, schemers and cowards. This country of little people is not worthy of its elders, not worthy of survival. Someday its decay will bring it to the level of a slave, but if I’m still here, I won’t be one of the slaves. Believe me, it’s not in my temperament.

During her athletic career in the 1920s, Morris became friends and associates with many of France’s artists and intellectuals. She had longstanding friendships with American-born entertainer Josephine Baker, actor Jean Marais, and poet, author, and filmmaker Jean Cocteau. In 1939, Morris, along with her partner, actress Yvonne de Bray, invited Cocteau to stay with them at their houseboat docked at Pont de Neuilly where he wrote the three-act play Les Monstres Sacrés.

Arrest and Acquittal for Homicide.

In January 1933 Morris moved into a houseboat, La Mouette, with her partner, Yvonne de Bray, which was moored on the Seine at Pont de Neuilly in northwest Paris near the Bois de Boulogne. Living off inheritance annuities, she took up lyrical singing and was successful enough in the hobby to be broadcast performing on the wireless.

On Christmas Eve 1937, while having dinner with friends and neighbors Robert and Simone de Trobriand at a restaurant in Neuilly, the trio encountered a drunk and aggressive young man named Joseph Le Cam. The unemployed ex-Legionnaire became embroiled in a heated argument with Simone de Trobriand. Morris was able to calm the man after some time. The following evening, after more drinking in Montmartre, Le Cam arrived at Morris’ houseboat and another argument took place, this time between Morris and Le Cam. Le Cam left the houseboat, but soon returned after seeing Simone de Trobriand, with whom he had been arguing the night before, boarding La Mouette. Le Cam then rushed back to the houseboat, brandishing a knife and threatened both Morris and de Trobriand. Morris pushed Le Cam several times before he lunged at her and she produced a 7.65mm revolver. Morris fired four shots, the first two into the air, the following two at Le Cam. He would later die in hospital. Morris was arrested and charged with homicide and incarcerated for four days at the La Petite Roquette prison in the 11th arrondissement of Paris. She was tried in the cour d’assises in March 1938, but was acquitted when the court accepted her plea of self-defense.

Morris was invited to attend the 1936 Summer Olympics by Adolf Hitler and historian Anne Sebba stated that Morris was an honored guest.

During World War II and the German occupation of France, Morris served as a collaborationist for the Nazis and Vichy France. The nature of her accused collaboration varies, with some, such as writer Raymond Ruffin, claiming one of her main responsibilities during the war was to foil the operation of the Special Operations Executive, a British-run organization that helped the Resistance. He also suggested that, as well as being a spy for the Nazis, she would have been involved in the torture of suspects, and for all of these activities, she was sentenced to death in absentia. Although Morris sourced black-market petrol for the Nazis, ran a garage for the Luftwaffe, and drove for the Nazi and Vichy hierarchy, others state that this appears to be the limit of her collaboration – and was in any case what she did before the fall of France – and that no evidence exists to support Ruffin’s claim that she was involved either in spying or torturing, but perhaps that she was a suitable scapegoat, especially considering her comments before the war. Whether or not it is accurate, her reputation for involvement in torture and enjoying it led her to become known popularly as the “hyena of the Gestapo.”

On 26 April 1944, while driving in her Citroën Traction Avant on a country road from Lieurey to Épaignes in Normandy with the Bailleul family, who were favorably positioned with the Nazi regime in France, Morris’ car sputtered and came to a halt. Earlier in the day, the engine had been tampered with by maquisards of the French Resistance Maquis Surcouf group. Resistance members then emerged from a hiding spot and opened fire on the car. The three adults and two children in the car were killed. Ruffin claimed that Morris was the target, but Bonnet states this is not clear, given the influence of the Bailleul family with the Nazis. Her body, riddled with bullets, was taken to a morgue, where it remained for months, unclaimed. She was buried in an unmarked communal grave.