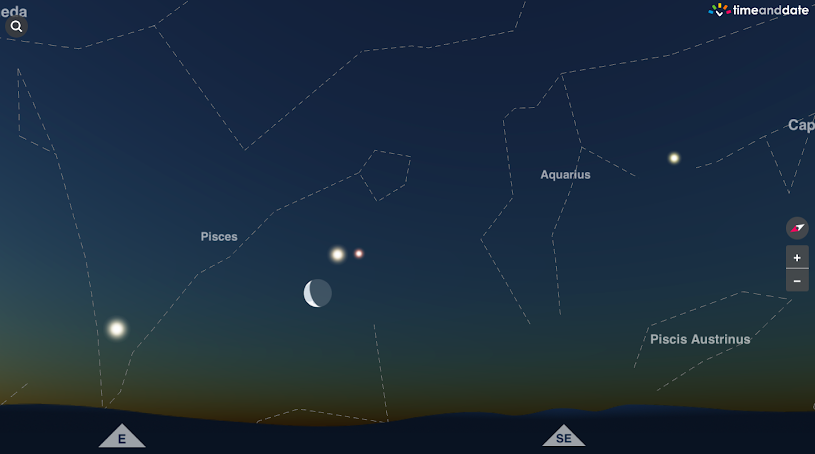 Like a string of festive lights strung across the early morning sky, the planets (and moon for now) are revealing an astronomical message for those still living.

The theme song we have been hearing in our heads is Aquarius/Let the Sunshine In, from the movie Hair.

A conjunction is when three planets line up, and they are common. An alignment is a rarer humongously beautiful bit of nature. One as is occurring now last happened in 2003 and won’t happen again until 2040.

The alignment might get more press except that humanity has been busy looking down at its bumbling feet for a long time now.

I had a 10 year old primary school student that was looking up, and thinking about it as well. He came to me one day with a heavy existential problem. Yes, children can have those, too.

This philosophical little person was troubled to tears. Why?

“I don’t even know if space ends or not!” he cried in despair.

He was so perplexed that he gave up his recess (many student’s favourite part of school) to bring me this little nugget of human experience. It is one I will never forget.

Whether space ends, or not, it is the planets that are the stars in the morning sky right now.

We have been watching this dawn show since the beginning of June. The screenshot above is from then. The shot below is what it looked like last night.

Our bedroom is situated so that we can see the horizon and a bit of the sky on clear nights. From bed.

We live in a rural area close to a designated Dark Sky region, and the nightly light show is mind-boggling on any cloudless night, but especially so now.

I wish I could talk to that young philosopher today.

“Humanity”, I would say, “should be looking up at the night sky to help put our puny, solvable problems into perspective.

The Universe is a big, beautiful (infinite?) place. Why think so petty, limited, and small?”