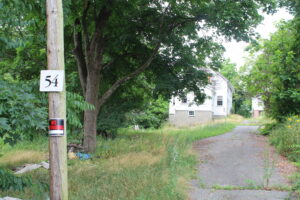 HUDSON – Two houses at 27 Cox St. and 54 Lake St. could soon be torn down and replaced with new single-family condominiums.

The Hudson Zoning Board of Appeals (ZBA), however, has raised questions, debating whether this plan qualifies under a bylaw allowing property owners to modify structures that were grandfathered into current zoning regulations.

They would be replaced with two detached, single-unit condominiums, although they would be in different places than the current houses.

Right now, 27 Cox St. and 54 Lake St. are located on the same parcel. However, they are listed as different addresses. Litchfield said that the new condominiums would be named 27 Cox St. units A and B.

“The reason why I went to condos was to kind of clear up the address confusion,” Litchfield said.

Litchfield said that he had to apply for a special permit through the board because the property is nonconforming with town bylaws. He said the specific nonconformity is that the lot does not have enough frontage on Cox Street.

Members of the board were not certain whether Litchfield’s proposal met the criteria for a nonconforming use.

Board Chair Darja Nevits said that qualifying proposals typically include old foundations, which Litchfield had not presented. She also said that the request to use a specific bylaw regarding continuing existing uses, buildings and structures to create structures in a new location is atypical.

“I cannot recall, and, maybe I’m forgetting something, a situation where somebody is using it to completely build new structures,” Nevits said.

The bylaw states that structures and premises that go against town bylaws are allowed to continue if they predate the bylaws. It allows the board to grant special permits that can modify nonconforming structures.

Nevits added that creating condominiums at the site would also change the site to something “even more different.”

Litchfield said that he was not changing the nonconforming status of the lot at all, just moving the location of buildings on the lot.

He said he thought his proposal was clear-cut. He continued, however, saying that he realized the board was looking for much more information than he had prepared.

Litchfield represented himself in the meeting. He noted that, while he knows the board prefers to see applicants represented by attorneys, he had called three who were unresponsive.

Litchfield ultimately requested that the board grant a continuation until its next meeting on Aug. 11. They approved this unanimously, and Litchfield said he would try to find a lawyer who would respond to him.